Tax pitfalls of capital withdrawals from a pension fund at retirement

In the context of early or regular retirement, the question regularly arises for the persons concerned as to how the future retirement benefits from the pension fund (2nd pillar) should be drawn.

In addition to the traditional pension benefit, there is the option of a partial or full lump-sum withdrawal of the accumulated capital. In addition to regulatory and statutory restrictions, tax pitfalls in particular must also be taken into account in this context.

With regard to an upcoming retirement, the persons concerned are faced with various fundamental decisions. One key decision here concerns the type of future retirement benefit from the pension fund. In addition to the still frequently chosen exclusive pension benefit, which guarantees a regular income until the end of life, future pensioners can choose a partial or full lump-sum withdrawal, depending on the regulations of their pension fund. Over the past few years, it has become apparent that lump-sum withdrawals have become increasingly significant.

New recipients of a retirement benefit from a pension fund 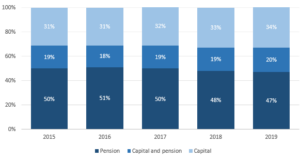 Partial or full lump-sum withdrawals are now preferred by more than 50% of new pensioners. The advantages of a lump-sum withdrawal are the free availability of the capital, in particular it can be invested independently and without regulatory restrictions, but can also be bequeathed to future generations. In addition, traditional pension benefits are becoming increasingly unattractive due to the steady reduction in conversion rates. In this context, it is important to be aware of the tax consequences of the various withdrawal variants.

Traditional pension benefits are part of ordinary taxable income and are taxed annually together with other income such as investment income or imputed rental value. There is no special treatment of such benefits. Depending on the amount of other income, the tax burden varies annually.

Capital withdrawals, on the other hand, are subject to a separate annual tax once when they become due and will only be subject to annual wealth tax in future years. Other income has no influence on the level of taxation. In recent years, numerous cantons have reduced the special tax rate that applies. In the Canton of Zurich, for example, lump-sum payments exceeding CHF 210,000 for single taxpayers and CHF 370,000 for married taxpayers will be taxed at a lower rate as of 1 January 2022. Appropriate timing of capital withdrawals can therefore help to reduce the tax burden.

Various planning measures can be envisaged in connection with the withdrawal of capital. If, for example, it has already been determined that a change of residence to another canton or abroad is to take place in the context of retirement, it is worth comparing the different tax rates of the previous and the new canton of residence, but also the tax consequences in Switzerland and abroad, and planning a relocation of domicile accordingly. As recently reconfirmed by the Federal Supreme Court¹ , such a change of domicile must of course be real and permanent and, if necessary, documented in particular vis-à-vis the canton of departure.

A tried and tested means of reducing the resulting separate annual tax payable is the staggered withdrawal of pension assets. Cantonal differences must be taken into account in this regard, which usually permit two to three partial withdrawals. However, this is often linked to a corresponding reduction in the workload (so-called partial retirement). At the same time, certain activities, such as serving on a board of directors, can still be pursued even after (partial) retirement.

Since the tax burden on capital withdrawals can be very high despite the separate taxation, unplanned tax demands can be extremely unpleasant. Especially in situations where the capital drawn has already been reinvested or consumed, liquidity bottlenecks can arise.

We can provide you with comprehensive advice on all tax issues relating to an upcoming retirement. In addition to the choice of retirement benefits, aspects relating to succession planning for a company or future activities can also be optimised from a tax perspective. It is worth contacting us at an early stage in order to examine your personal tax situation and identify any potential for optimisation. We look forward to hearing from you.

Newsletter, Tax pitfalls of capital withdrawals from a pension fund at retirement (PDF)

This website uses cookies to improve your experience while you navigate through the website. Out of these, the cookies that are categorized as necessary are stored on your browser as they are essential for the working of basic functionalities of the website. We also use third-party cookies that help us analyze and understand how you use this website. These cookies will be stored in your browser only with your consent. You also have the option to opt-out of these cookies. But opting out of some of these cookies may affect your browsing experience.
Necessary Always Enabled
Necessary cookies are absolutely essential for the website to function properly. This category only includes cookies that ensures basic functionalities and security features of the website. These cookies do not store any personal information.
Non-necessary
Any cookies that may not be particularly necessary for the website to function and is used specifically to collect user personal data via analytics, ads, other embedded contents are termed as non-necessary cookies. It is mandatory to procure user consent prior to running these cookies on your website.
SAVE & ACCEPT